We loaded up the Adventure Pod (a 2010 Honda Fit) and pointed it’s stubby nose Westward. We were Texas bound! What followed was a nearly 4,000 mile road trip that traversed 7 states (Virginia, Tennessee, Arkansas, Texas, Louisiana, Mississippi, and Alabama)   and dipped into the corner of a 8th (Georgia). This would knock 5 states off my goal of visiting all 50!

But back to Texas! i rolled into the Lone Star State with a lot of preconceived notions about the biggest of the contiguous States of our great Republic: Among those notions were: Big boots; big hats; big trucks; big egos; more swagger than an Old Spice commercial; and… guns, guns, guns! Mostly on the negative side of things: i imagined Texas to be all things Redneck. What i found was something totally different, well the big trucks was spot on but most of the other things were off. Texas is a dab of nearly everything: Big city life & Rural living; Conservative values & free-thinkers; Posh living & rugged sustenance. Texas has deserts and giant lakes, rolling hills and flat prairies, eight lane super highways and gravel back roads.

We came in from Arkansas and rolled on down through Dallas. 9th largest city in the U – S – of A. Then we just kept driving South and West. It was the more rural parts of Texas that really got to me. Out of all the places i’ve ever been rural Texas has the nicest people i’ve ever crossed paths with. Every stop for gas was a joy. Every meal meant interacting with the excellent slice of the human population we call Texans! If i had to break down with no money in my pocket i hope it’s somewhere in that part of the world (just maybe not in the dog days of summer). We even got pulled over in some tiny town North of Best TX (Best TX has a sign informing you of their population of 1!) and that officer wins the award for nicest traffic stop i’ve experienced in my life. That award was previously held by a fine law-man in New Hampshire who pulled me over for speeding in the wee hours of the night and then seeing i was far from home and just wanted to get to our hotel 30 minutes up the road told me to, “Drive a little slower the next time you come through here,” irony fully intended by him. This friendly Texas Deputy just wanted me to know that i had a headlight out. To put in perspective how rural the town was we were in when i asked him if there was an auto parts store here he informed there was but he doubted it would carry a headlight for a Honda. 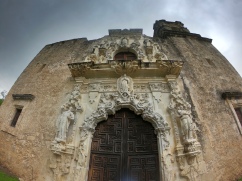 Out of the cities we set foot in, San Antonio was my favorite (it’s the 7th largest in the U.S., bigger than Dallas but doesn’t feel like it). If you like malls you’ll love the River Walk (i’m oddly nostalgic for the malls of my youth but not a mall shopper and i’ll admit the River Walk is a pretty top-notch set up). The Historic Market Square is really amazing, we were there on a Wednesday around lunch time and there was live music, street food, booze… San Antonio knows how to party. We grabbed lunch at Mi Tierra which holds some odd technical distinction; they are the largest Mexican restaurant in the world by volume of food sold… or something like that. Food was amazing,  a mariachi band roved around from table to table, and its one of those “tourist things” you should just do if you’re in San Antonio. We also hit up the unforgettable Alamo.  You’ve probably heard to not set the bar real high in regards to the Alamo, i don’t know if that’s a fair thing to say. Is it small? Yes. But it’s still an important historical site, especially for Texans. Set your bar appropriately: it’s a historical site. Go there to learn and stand where brave men gave their lives for a cause they believed in.  We also visited another historic mission in San Antonio and it was really amazing, such a peaceful and beautiful place to take a stroll.

Big Bend National Park has been on my list for some time now, so having the chance to set foot in this National treasure was a real treat! i plan on returning one day when i have time to get some miles in on my hiking shoes. The stark beauty of the desert there, the muddy churning Rio Grande, the surreal feeling of the Chisos Basin, standing where a trove of paleontological finds have been made! Some of the Features of Big Bend stack up pretty well against monolithic features found in other parks as well. i have tasted of the arid sweetness of Big Bend, and i hope to be back!

We braved hail and thunder storms, sunshine and winds, city traffic and warnings of Elk and Pronghorn dangers on country roads to see a decent chunk of Texas. Texas was great, but the real standout are Texans: overall pleasant, welcoming, hospitable folk. Again, i had some negative ideas about what Texas would be and i’m very happy it proved me oh so wrong. Texas is as proud of Sam Houston as it is of Willie Nelson. Austin with it’s weirdness is as much Texas as Dallas and it’s Oil money. You can be Texan and live in a high rise or you can lay your head down in a camper surrounded by 400 acres of scrub brush. Houston… we have a problem, i wanted to get Texas off my list and leave it behind but i visited it and found out why you don’t mess with Texas! Can’t wait to top off my gas tank at a Buc-ee’s and fill up my belly with a Whattaburger again.